Coupang Hosts U.S. Ambassador and Korean Officials at Daegu Fulfillment Center to Discuss Its Latest Investments and Innovations Across Korea

SEOUL, Dec. 7, 2022 --- Coupang today announced that it hosted U.S. and Korean government officials at its Daegu Fulfillment Center (FC) on Wednesday, December 7 to discuss the company’s latest contributions to the Korean society. The event was attended by Philip S. Goldberg, the U.S. Ambassador to the Republic of Korea, and officials from the government and local governments, including the deputy mayor of Daegu Metropolitan City and the Ministry of Science and ICT's artificial intelligence-based policy officer.

The state-of-the-art Daegu FC, which opened last March, is one of the hallmarks representing Coupang’s commitment to investing in Korea. The company has invested over KRW 300 billion into the Daegu FC, one of the largest FCs in operation in Asia, which spans 46 football fields in total area and is equipped with cutting-edge technology from artificial intelligence (AI) to custom robotics. The opening of the FC has created a new sales channel for the region’s small businesses, helping revitalize the local economy. In addition, the company plans to directly create over 2,500 jobs through the FC, which the Company believes can have an indirect employment effect of roughly 10,000 additional jobs.

Coupang’s event at the new Daegu FC included speeches from key company executives, including Harold Rogers, Coupang’s General Counsel and Chief Administrative Officer, and Hanseung Kang, the Representative Director of Business Management at Coupang Corp., the company’s Korean entity. Under the title “Creating WOW: Showcasing Coupang’s Investments & Innovations Across Korea in 2022,” the event focused on Coupang’s unique win-win model that supports the growth of customers, workers, and small businesses across Korea in a sustainable manner.

For example, since the company’s founding in 2010, Coupang has invested USD 5.4 billion into the Korean economy, operating in over 30 regions across the nation. In the last year alone, it accounted for nearly half of the total USD 2.5 billion in foreign direct investment (FDI) from the U.S. into Korea. The company’s investment into building its unique end-to-end fulfillment and delivery network has provided customers an unparalleled combination of speed, price, and selection through services such as Rocket Delivery and Rocket Fresh. 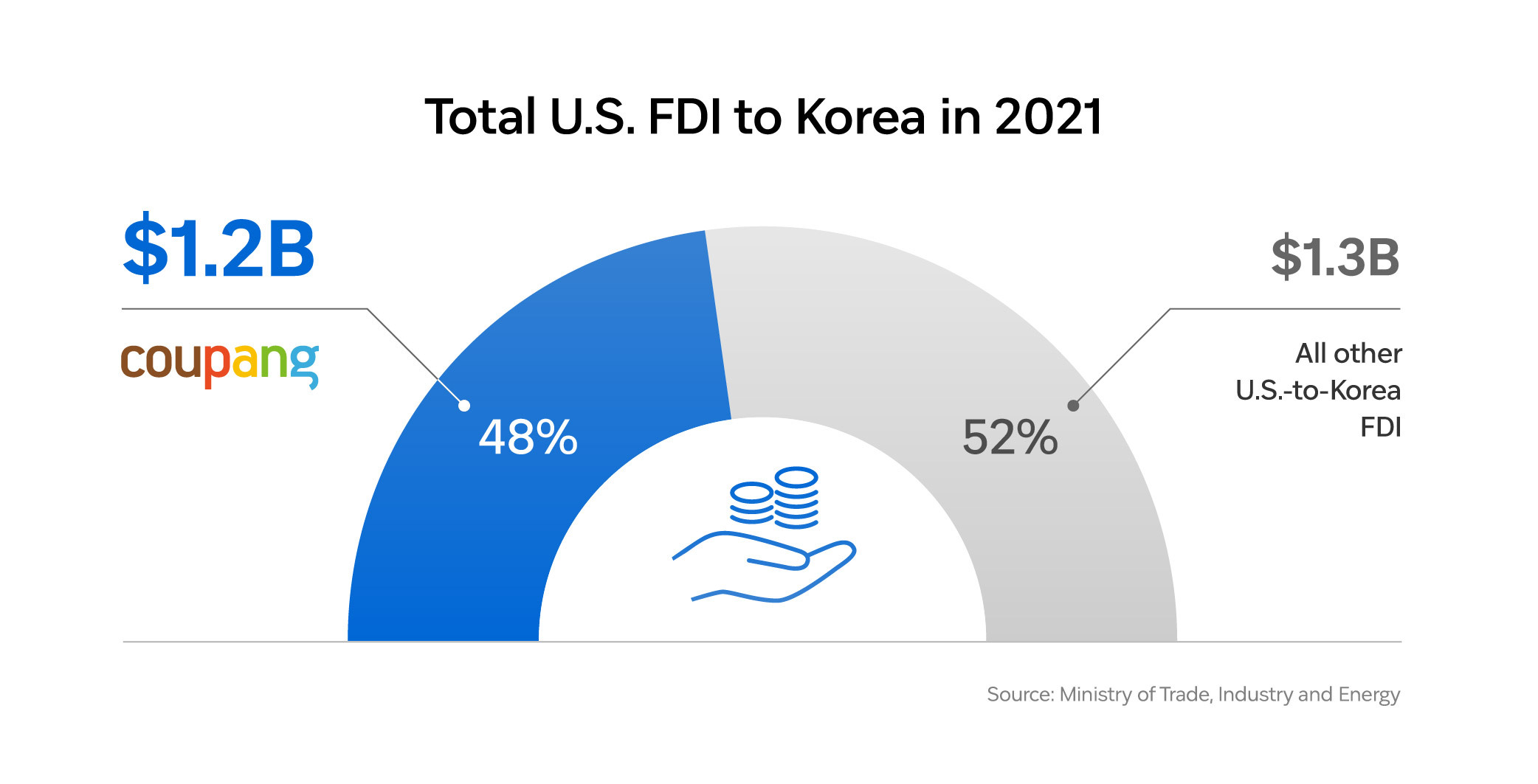 These investments and innovations have not only transformed the customer experience, but also significantly improved the work environment for employees. For the last two years, Coupang has been the top private job creator in Korea, with over 60,000 total employees. And, thanks to the use of technologies such as robotics and AI, we can drastically reduce work intensity for these employees.

Coupang’s end-to-end logistics infrastructure has also become a growth driver for small and medium-sized enterprises (SMEs), which account for 70 percent of all sellers on Coupang. Even as offline SME sales fell in Korea from 3Q 2019 to 3Q 2022, SMEs on Coupang saw their sales grow approximately 140 percent, thanks to Coupang’s continued SME investments and growth projects to connect these SMEs to its millions of customers nationwide.

Such win-win growth is backed by eco-friendly innovations only possible through Coupang’s unique end-to-end model. Coupang’s own decentralized and technologically optimized network reduces emissions to a minimum, and allows it to deliver 85 percent of orders without additional box packaging. Such emission and waste elimination efforts are equivalent to planting 8 million new trees this year.

Daegu’s Vice Mayor for Economic Affairs Jong-hwa Lee said, “Coupang is greatly contributing to revitalizing the local economy and creating new jobs through its steady investment and innovation even during the COVID-19 pandemic and economic crisis.” He added, “The company’s Daegu FC is meaningful as an exemplary model of regulatory reform, and we will continue to actively cooperate with Coupang in smart logistics systems and other future industries.”

“It was an honor to host the U.S. ambassador and Korean government officials at our Daegu FC, which symbolizes our commitment to breaking tradeoffs for not only customers but all our communities through technology,” said Coupang’s General Counsel and Chief Administrative Officer Harold Rogers. “The gains we’ve created for customers, Coupang’s workers, SMEs, and the environment have gone hand-in-hand. That’s innovation at its core, that’s the role the private sector can and should play in bettering our world, and that’s the role in which Coupang is determined to continue our leadership.”

Coupang’s Representative Director of Business Management Hanseung Kang said, “Coupang’s logistics workplace is transforming into a state-of-the-art digital technology site that combines artificial intelligence algorithms and automated robot technology. Our digital technology is meaningful in that it is upending conventional wisdom that digital technology will reduce employment and leading to employment in and revitalization of the local economy. Our investments in these technologies are also contributing to improving the working environment of our employees and dramatically reducing work intensity. We will continue working to create value for customers, workers, and local communities alike, as well as to create jobs, develop the local economy, and serve as a foundation for small businesses to grow.”